The steam release went pretty smooth, we received new batch of bug reports, but they were manageable and the 0.12.25 update covered most of it.
The rating is much better than we expected, the fact that we are currently the #1 in games on steam sorted by rating is something no one would even dream of. I would like to thank you all again for all the positive reviews, it feels good to read them. I plan to read a batch of them whenever I need energy to overcome some very annoying bug or technical problem. It gives me the feeling that it is worth it :)
We actually made a contest of guessing the steam ratings before the release. Here are the guesses, I believe that it partially shows how much we think Factorio should be improved: The sales of Factorio went pretty well, and we probably can't talk about exact numbers due to the legal agreement with steam. I believe I can say that we sold slightly more during this week on steam, than during the whole last year on our page, which is overwhelming. This obviously makes us think about the future. First however, we need to talk about the plans for the 0.13 release, which brings us to:

The tech tree visualisation is getting closer to completion, the examples shown here are showcases of the icon organisation logic. The graphical representation (lines) and some details will be updated with the help of our graphics department, but the result will probably look close to this.

The logistics 2 technology icon is big as it is the selected one. We might add an additional way to indicate that it is the currently selected research. Requirements and continuations of the technology are both shown here.

Here you can see all the requirements of the personal roboport research. 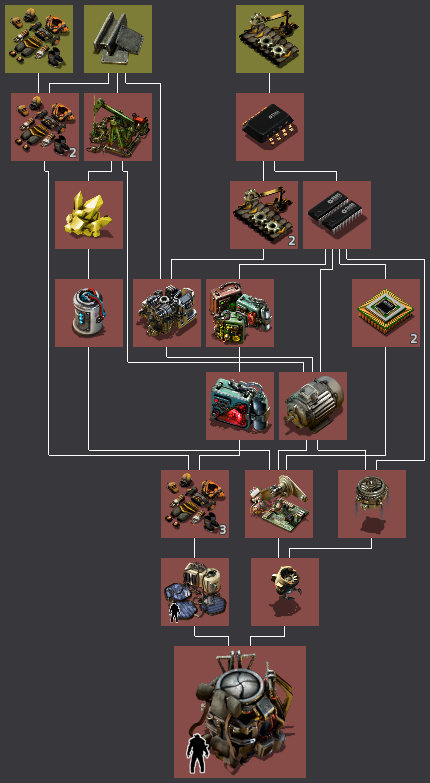 I believe it will help players to understand the tech tree a lot, and improve readability. As the algorithm is general, it can especially help to clarify complex mod research dependencies.

I have this idea of the missing transport belt related piece for some time, so I made a prototype to see how useful is it.

The temporary name is loader and this is how it works:

It is an entity that can load or unload the contents of a container as fast as the transport belt can handle. It is 2X1, and it's much more expensive than inserters so they are still viable in many places. As it affects the core mechanics of Factorio I want to be really careful with it.

Pros: Cons: I would like you, the Factorio players, to give us your opinions on this topic in the forum thread as usual.