I saw a lot of discussion where people thought that we are just adding features and delaying 0.15 by that, so I would like to describe the situation. There are several bigger things we wanted to have done for the 0.15 and are not yet ready:

Those that don't work on these tasks would have to just wait, so they do smaller tasks. This is why I was doing the map improvements, this is why Rseding is doing the optimizations and map presets etc.

Once everything apart from the nuclear power graphics are done, we will start the playtesting, and we want at least a week of playtesting before considering the experimental release, but it can be more if we encounter some unforeseen problems. The graphics can be integrated just before the release, as it shouldn't introduce new bugs. After the experience with previous release date estimates, all I can say about it is: "We are working on it".

When we are ready to make a release, it will be either on a Monday or a Tuesday, to give ourselves some long working days to bugfix while the reports are fresh. This means we will probably know the Friday beforehand that everything is ready, in which case we will let everyone know in the FFF. To clarify: If you don't hear us mention releasing 0.15, you can rest easy for another week that we aren't going to surprise you.

The finalization of map improvements

This is extension of what I did and covered the last time.

More colors The next step was to work on the map color a little bit. We want to find a good balance between a lot of info provided by the map and colorful chaos. Just adding specific color to a few things (turrets, solar panels, accumulators, different shades of yellow for splitters & underground belts) to make the map much more readable. This is not the definitive version, as the colors might be tweaked, but I can already read the map better: 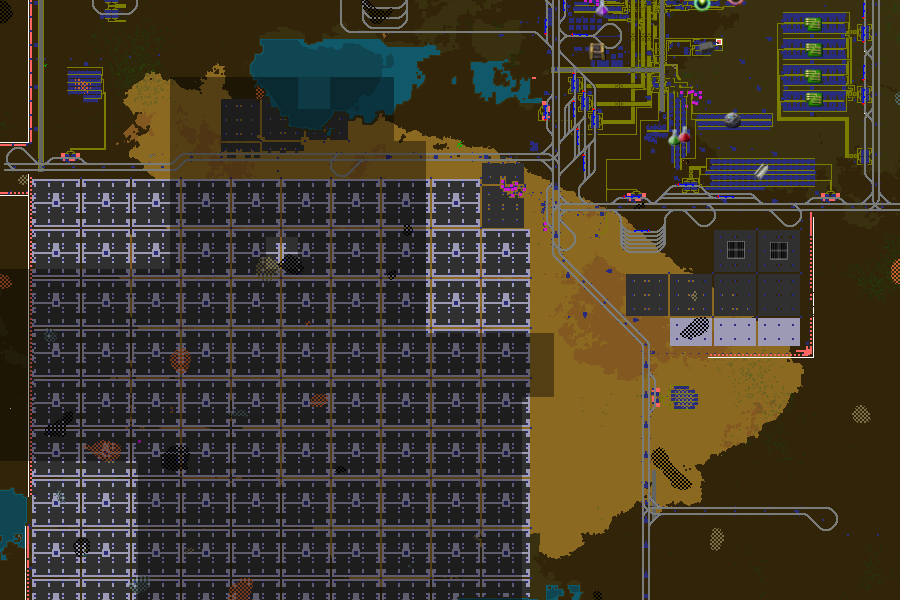 Turret range option: Optionally viewable as with the other visualizations. 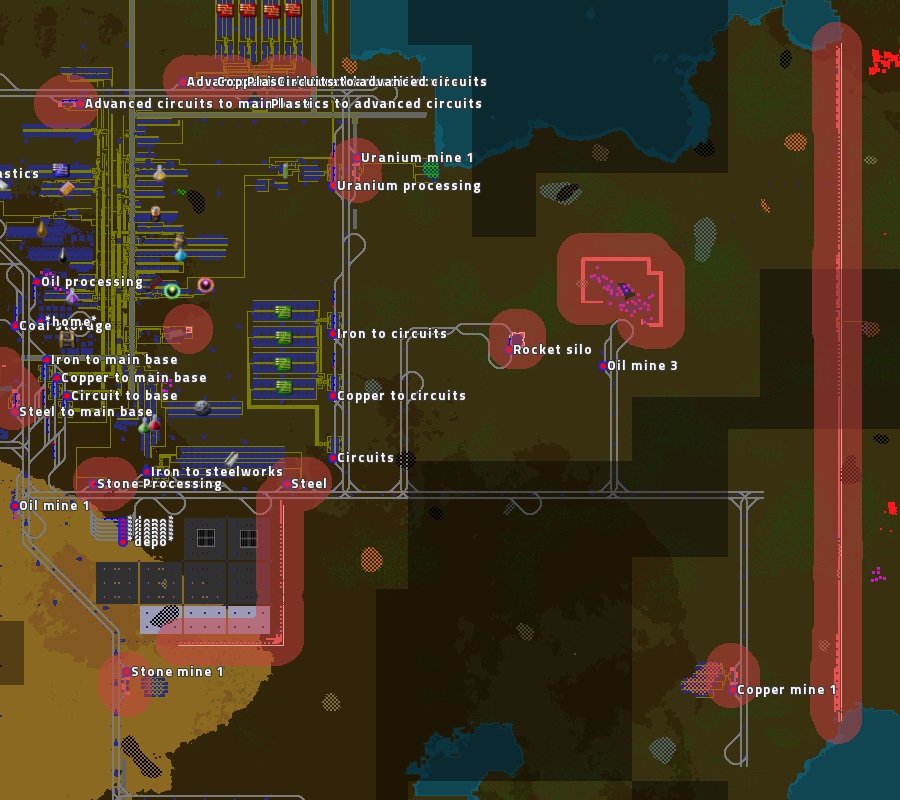 Zoom from map to the world

This took the most time to do, but I like it the most. When you zoom in, at a certain zoom, you just switch from the map view to the game view. We don't want the players to accidentally switch to the map view when playing normally, so it is only applicable when the player is using the map view explicitly. The first obvious problem was, that it would be too strong as you could see everywhere, so we limited this kind of view only to the area covered by radars or other players, the parts not covered still show the map view.

I was afraid of how ugly it would look to combine the game view and the stretched map view, but it actually isn't that bad, and it teaches the players the colors on map as well. 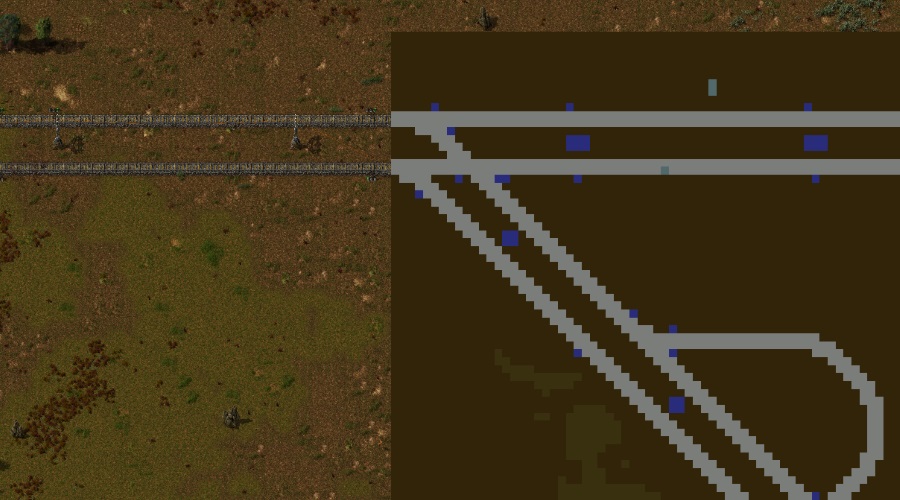 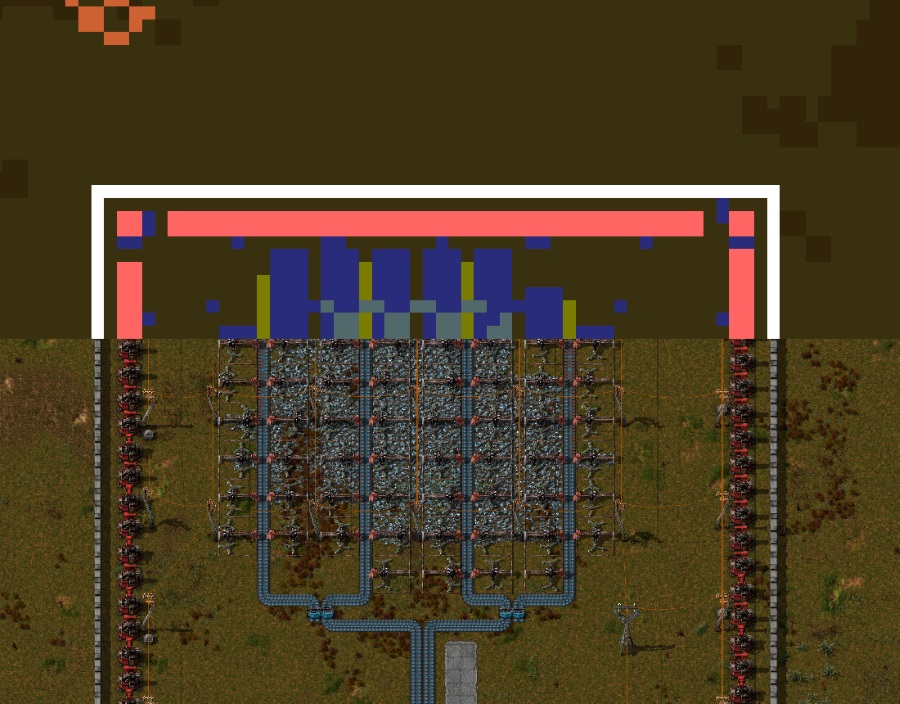 We are considering whether it should be possible or not to build ghosts, blueprints and use deconstruction planner from the map, maybe it could be unlocked by specific research, we might leave further additions like this to 0.16, but it really depends on how long we have to wait for the bigger things to be done.

An extension of the map settings FFF.

We decided to make only the normal and expensive version of recipes and technologies. The easy/simple version would promote the automation even less, and it might even be remotely possible to finish the game by making things mainly by hand crafting, which would push the player the wrong direction. I was experimenting the Expensive recipe costs a little, and it seems that making few vital components, like iron gear wheels, circuits, steel and miners more expensive, might be enough to slow the game down. I personally found it refreshing to not jump through the early game as fast as I'm used to.

To make things more graspable we defined few presets, so when you say that you finished the "death-world" settings, it means something specific.

As always, let us know know you think on our forums.