Hello, version 0.15.30 was released today, and we consider it to be our first 0.15 stable version candidate, as long as no other big bugs appear, we will have 0.15 stable in a week. As the teasing never ends, it is time to show some ongoing work on 0.16 already.

The transport belt optimisations explained in FFF #176 are now merged in our 0.16 developer branch. I tested it on a megabase factory and the improvement was quite noticeable. The UPS of the whole factory was increased from 25 to 38, the belt update itself runs 5 times faster now. I hope that we can make the game run 2 times faster again before 0.16 is out :)

There is a basic problem with the way grass and water terrain interact in Factorio.

The first one is related to the fact that the transition is on the tile of the grass. This means that the whole transition is considered to be a grass tile, which leads to weird looking things like this:

The solution is quite simple, we will just define that the transition is drawn on the water tile instead, something like this:

as the minimum width of one tile of land will make this shape:

This is simple so far, but it creates new problem, as suddenly we need to solve situations like this: 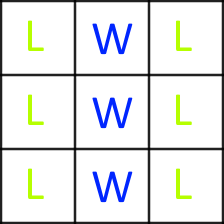 but in next version, we would need to have graphics like this:

Note, that this is just one combination, we would need all the other shapes like "O", "U", "L", and mainly the graphics of the transition suddenly wouldn't have the space of the whole tile, as a possible transition to another terrain can be on the other side.
The solution of the problem is being investigated now by making some graphical experiments, but the possible solutions we see now is:

The second part of the interview

As some people requested it, we made subtitles of the second part of the interview with me. It is more focused on the technical part of Factorio which might not be entertaining for so many people, but some might still find it interesting.


As always, let us know if you have any thoughts or feedback on our Forum.