another bugfix themed week passed and the release is here. When I'm asked to do something on friday and I say that we have the release, the typical answer is something like: "Again? Didn't you release it last week?", well we did ... :)

Apart the bugfixing and moral preparation for the MP coding beast, the integration of new sounds for the 0.10 is in progress as well. First experiments of the environment sounds are done, which means that as the player goes through the factory, he can hear nearby machines working. This is very delicate matter as we don't want to make the player turn it off 5 minutes in game, but if done right, it can add a lot to the factory mood.

We are very happy that people communicate on the forum, and I try to read every single post, but the last time I had marked everything read is more than 2 weeks ago. More than 5 pages of Ideas and Suggestions are waiting. The question is what exactly should we do about it, as the time spent on the forums is getting bigger and bigger every week, and I can easily "wake up" after reading it for 2 hours straight and not doing any real work on the game. We are starting to have these habits of reading in quick mode, which usually means just getting some general idea of what is going on in the thread and we usually don't read at all when we see that some other staff member replied already. So if we didn't respond to your thread, please don't take it personally, and If you feel it is important, you can bum it after some time (week at least).

The big part of the work on the modding capabilities of Factorio was done during the days we were unsure about the its future. Working on something that could be used to extend the game that we were not sure anyone would play at all was looking useless. Hopefully we are still here, and new mods are arising. Some of the mods are simple but useful, like the TIme buttons, that is patching the lack of time speed configuration in-game, some are just tempting to be used because of the pictures, like Mocombat, for people that found the production chains not complex enough, there are the content-based mods like Dy tech, F-Mod and more. The growing variety of mods can only exist because modders pushed us to extend the moddability regulary and it proved more than once, that the extended interface was handy to have later even in the core Factorio, not mentioning that mods are also great incubators for new ideas that could grow into the vanilla game. So after all, we rate the time invested on modabbility to be well spent.

The tesla tower from the mocombat: 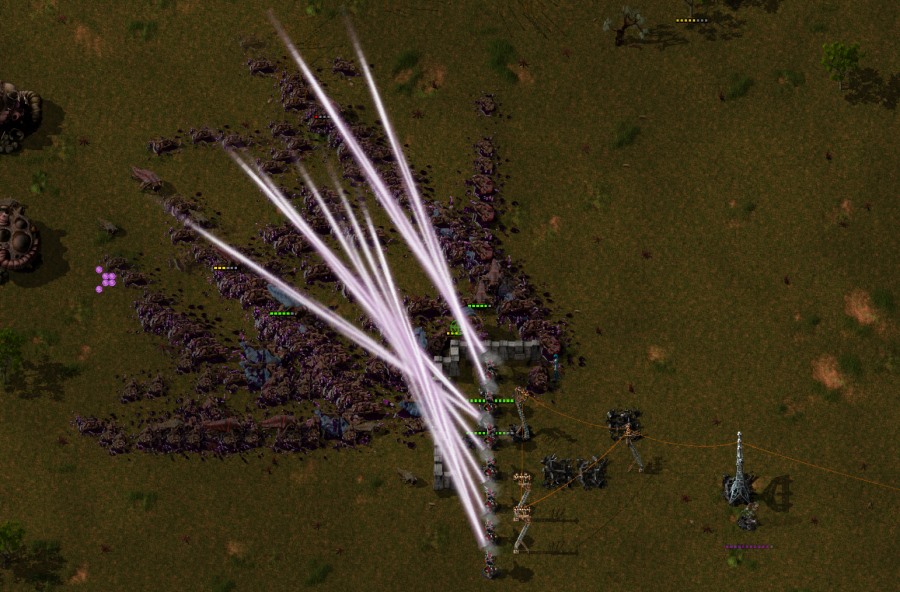