I'm sorry to say that we have removed the RTL language translations (Hebrew and Arabic) in 0.17.20.

Until this point we've had a half implementation of RTL languages, where the text is simply flipped when we download it from Crowdin. This 'works' for a decent proportion of things, but not nearly 100%. In order to attain the level of polish we want for the 1.0 release, we would need to spend a lot of time implementing proper support for RTL layouts. This just doesn't make sense for us given our current goals, and the proportion of our player base which uses these languages (less than 0.1%). We decided that instead of completely gutting the translations, we could leave them in for those who enjoy them, but not to offer them in the GUI as defaults.

The languages will remain up on Crowdin, and the locale files will still be present in game, but there will be no option in the in-game language options dialog to choose them. If you want to use an RTL language, you will have to manually edit your config file to set your locale. Detailed instructions are available on our forum. What this also means, is that we won't be investigating any bug reports about RTL issues.

Years ago when I was just getting into the programming field I was told by others that someone typically starts in the QA/bug tester positions and if they prove themselves can move on to do the "fun" work. That implies that the QA/bug tester positions aren't fun and that I should look forward to being done with those tasks. It was 4 years, 7 months, and 8 days ago (as of writing this) that I asked Kovarex about possibly letting me help fix bugs in Factorio and today bug fixing is my 2nd favorite part of working on Factorio (with optimizations taking first place).

The weirder and more difficult a bug is to track down the more I enjoy working on it and finally seeing it resolved. Naturally as I've spent so much time working on bug fixes (in the same code base - and always going for the difficult ones) I've gotten quite good at it. One of the fun parts of fixing the difficult bugs is putting the reproduction steps in the changelog and watching peoples reactions when they read the patch notes for that release.

Some of the more interesting ones from the 0.17 bug fixing so far:

Most of these where ~10 line fixes but the reproduction steps took anywhere from a few hours to a day.

They still haven't beaten the best ones we've had previously:

Overall bug fixing is going well. We had a rough release earlier this week related to some GUI logic not working correctly. In the past we've talked about our automated test system (FFF-186) which normally tests game logic. With the rough release earlier this week it pushed me to get the test system in a shape where we can run automatic graphics tests (in hopes of avoiding the issues we had during the 2 broken versions). We still have a few small things to fix but otherwise the automatic test system can now run the full graphics interface while running the tests (in parallel). Just for fun, I set it up so it would arrange the windows in a grid:

Since forever, when killing an entity we used generic remnants (with a few exceptions, walls, rails...). We only cared about the size of the entity and it is done.

This is an okay solution, but we want more specific and natural remnants, so it is possible to recognize which entity was destroyed. That’s not really super necessary because ghosts are normally providing this information, but we are polishing the game and making everything nicer when possible. So we started experimenting with the small electric poles. 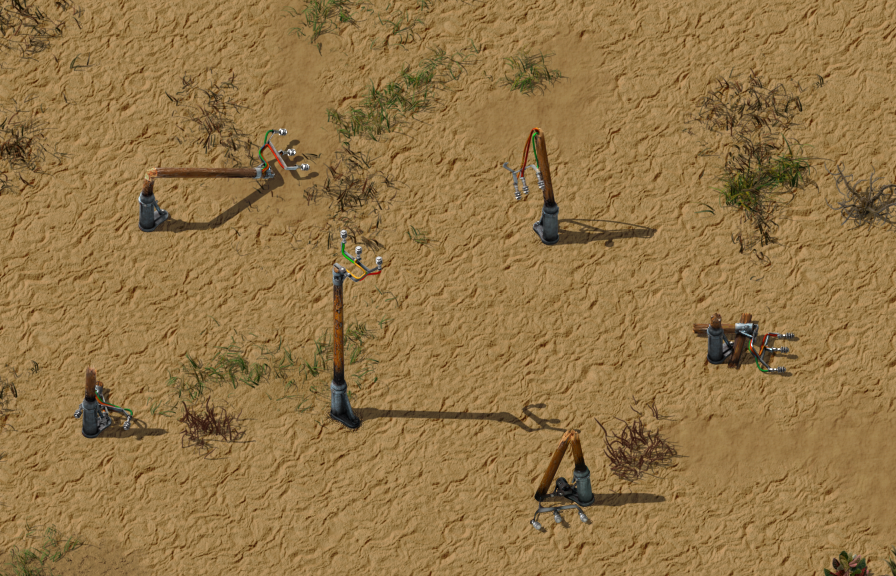 We realised how simple things can become complicated in no time with Factorio. For starters, the old generic remnants are very flat because the character can walk on top them and they have no collision box. Also they are moved from the objects layer to the corpse layer which is rendered under it. Now that we want more specific and custom remnants for entities, sometimes we need to grow in the Z-axis, which can result in something like this:

No big deal, we just need to keep the remnants in the object layer and everything is solved. The new problem is the sorting of the objects layer. Factorio renders the objects from top to bottom and from left to right. Meaning that objects on top are covered by objects below them, and objects on the left are covered by objects to their right. So we need to be very careful with remnants invading tiles not assigned to them. This makes the composition more difficult because this can happen:

In this case we were lucky, because that looks nice, but in the other direction we wouldn’t be so lucky. With more heavy remnants like nuclear reactor or oil refinery, we are not going have this happy accident anymore. Of course we will try to make these happy accidents possible with any setup, but allow me to be skeptical in this regard.

No big deal again, we just stay in our assigned tiles and we’re safe. But our chaotic composition of destruction starts to be pretty much like an Ikea assembly kit. Everything in place almost as it was before. But we still have the Z-axis let’s use it.

Well, remember that the player can walk through it and the remnants don't have collision boxes. It’s going to be really weird seeing the player literally ignoring the physicality of the world. One potential solution proposed was to add a collision box to the remnants, so we avoid this nasty visual effect. This solution seems nice from the beginning but it touches so many aspects of the actual balance of the gameplay that we dismissed it.

We are still experimenting with it, and trying to find the best approach in between all these limitations. Hopefully soon we will find a proper solution.