the days here in Prague are getting longer so the afternons (and evenings) in the office are becoming less and less depressive. We have been working with a good consistent effort for the past week and the results are imho there.

End of the tunnel

So the 0.11.16 (the bug version number is getting scary big) has been released yesterday. We have spent a lot of time preparing it and so far it looks like there are no major issues with it. We will get a better picture after the weekend during which the players will have time to test it. But it slowly starts to look like there is the light at the end of the tunnel. So maybe as the winter here is beginning to change into the spring (beautiful sunny yet cold day today) we will emerge with a stable 0.11 release and start working on the endgame prototype. However, the 0.11.16 doesn't have ambitions to become stable as we still have some bugfixes in plan and there will be bit more refactoring and improvements in the multiplayer logic. But we are getting there.

Since this has been quite a big release we have taken the testing seriously and our "dev department" spent half a day playing the game together on our ongoing multiplayer testing map. The result was a significant extension of our railroad system and many ideas of what should be added to the game (pretty much every 10 minutes someone shouted "we really need to add X"). Couple of them were rated as high on the todo list (though still behind the endgame content). Namely things like:

Oh yeah and the autosave needs to be coordinated in the multiplayer (otherwise the game just freezes for couple of seconds when someone is autosaving).

The ideas for the endgame content are slowly crystalizing. With kovarex, we have spent quite a few tram rides back home in the evening by talking about it. On top of it yesterday we have explained our ideas to everyone in the team and then we all discussed it. I will very briefly (we have talked about it in the past posts) summarize what the plan is as of now. From the story perspective we are building (and sending) a spaceship for civilians rescue mission (they are stuck in a broken ship in space). This will involve:

The ship will need to be able to move, generate electricity, get the resources, defend itself and ... (we will see). We will keep you up to date about exact ways of how we plan to do this in the future editions of Friday Facts. Stay tuned :D

The picture above shows our white board (quite an improvement compared to the whiteboard we used for multiplayer planning :)) after the brainstorming session. I would just like to repeat that this is still in the planning phase. We have some graphics already (the silo, the rocket and the space platform) done but the prototyping will begin only after 0.11 is finished. The plan is to start with the simplest prototype possible and then iterate until we get to the point where we are satisfied. We are aware that there will be many differences between the endgame content and the main part of the game. However the core concept remains the same: building automated systems. We really want to avoid making another game for the endgame content, on the other hand we feel that Factorio deserves a really good ending and we believe this will be exactly that.

While Pavel has been busy with the silo and the rocket, Albert has been working on the tilable spaceship platform. After many experiments and quite some hard work the platform is ready. You can judge for yourself below. The next challenge for the gfx guys is going to be the general space aesthetics (the background, the asteroids, the stars, etc.) and the new entities for the space platform. 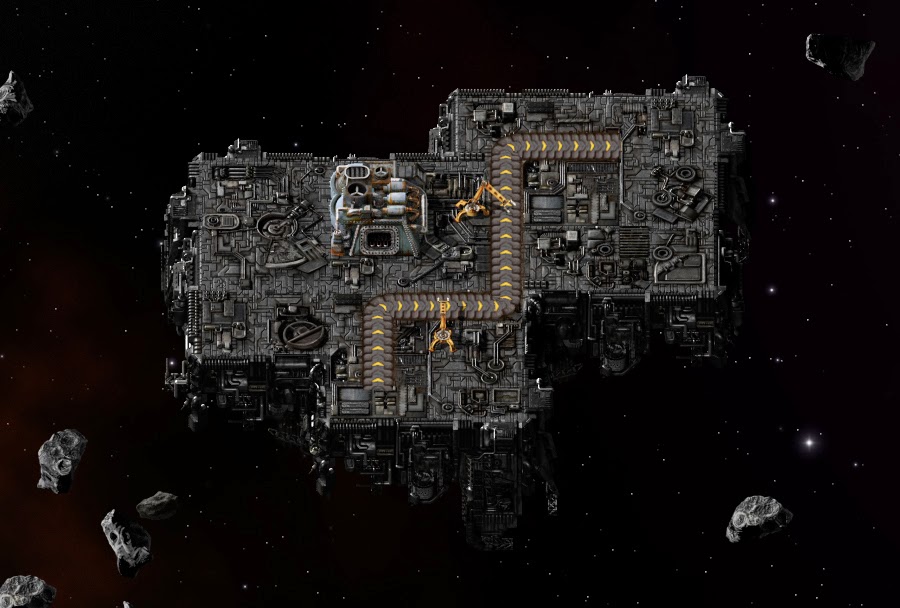 Let us know what you think at our forums.