Earlier this week I received the English proofreadings from Altagram, and overall I integrated over 500 suggestions into the game. Most were small, such as replacing "can't" with "cannot", things like that. It was the exact sort of external scrutiny we really needed, as it showed some areas where we were quite inconsistent. It feels like things are in a better place now, even if the majority of changes are relatively unnoticeable.

However it was very noticeable to our great community translators on Crowdin. When we update the English strings, the translations have to be updated on Crowdin. For the last few days I've been working through the issues raised on Crowdin, and there was a lot of good input on that last 1% of the changes.

So this concludes the 'English proofreading' phase. Starting on Monday, Altagram will start proofreading the target languages, and filling in any missing strings where needed. This should take about 3 weeks. Since Altagram has their own translation system for their team, it isn't really feasible to include Crowdin in this part of the work, they will just take the content from Crowdin at the start of the process, and after 3 weeks, push what they have back to Crowdin. So any translation work by volunteers on Crowdin for these 3 weeks would be wasted. So we ask that, if you want to volunteer your time, save it for a little while.

Any work done on Crowdin this weekend will be included. We deliberately made this buffer between the English corrections and the Target proofreading so that the players on Crowdin have an opportunity to contribute before Altagram starts.

After Altagram has pushed their corrections back to Crowdin, we will start the 'Community review' part of the process. This is when the work that Altagram's team has done is reviewed by players and feedback is given to Altagram via Crowdin issues. This helps us make sure the terms of the translations are consistent with the established community usage, and ensure there are no contextual issues or misunderstandings.

Rather recently we’ve started working on trailers, and first of all we needed to decide what exactly we want to do with them. The goal is that we will have the main trailer updated to the latest graphics, as all of it is rendered by a Lua script. It of course won’t be absolutely the same, since many things have changed or have been added, but we are going to try to match it as close as possible as we are very happy with this iconic trailer.

We are very happy with the other one as well, but we won’t update the Gameplay trailer, at least not for now. This has multiple reasons - mainly that it’s created entirely by manual screen recording which is a lot more work to try to replicate, and the gameplay message of it is still relevant today. It’s not helping that if we were to revisit this trailer, we’d like to make some changes/additions to the voiceover, which would mean creating a completely new voiceover, as added parts would just not feel perfectly integrated.

Long story short, we’re aiming to prepare a new third trailer dedicated to releasing 1.0 instead. We believe a special 1.0 Launch trailer will have more impact than just refurbishing the existing gameplay trailer, as it is more interesting to provide something fresh, tailored specifically for its use case.

Last but not least, the release of 1.0 is a big milestone and we find it appropriate to give it its own trailer.

Of course I’m not going to spoil all the details of what is actually going to be in the new trailer, but there is one specific section I have so many feelings about, it’s irresistible not to share them.

Factorio is much more than just the result product. It’s been a journey, and a very unique one. I think the process of how Factorio has been created is so important to the result, that it’s worth giving it a special place in the new trailer.

More specifically, this will be done by a series of clips, ranging from Factorio 0.1, transitioning all the way to 1.0, showing how Factorio evolved over the years.

There isn’t enough time to go through all of the major versions as the trailer is going to be rather short, so I reduced the selection to versions:

It is technically possible to load a savegame from 0.1 in 0.18 if you go through the necessary middle-version steps. So I just started casually playing version 0.1, imagining I’d just continue it in 0.6, build a bit there, then jump to 0.12, and so on...

Note: none of the images below are final, as the trailer is being worked on. 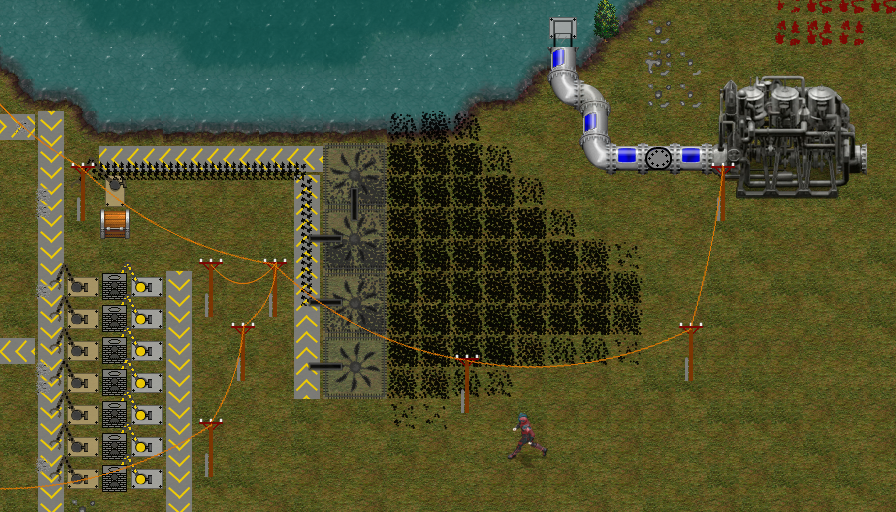 A random factory being built in 0.1
Click to see full resolution

When I had a small factory built I started to wonder how do I actually bring this to 0.6...

As always, it’s not that simple. While technically working, loading obviously does not handle all of the changes to the game, like map generation, entity sizes, or recipes... 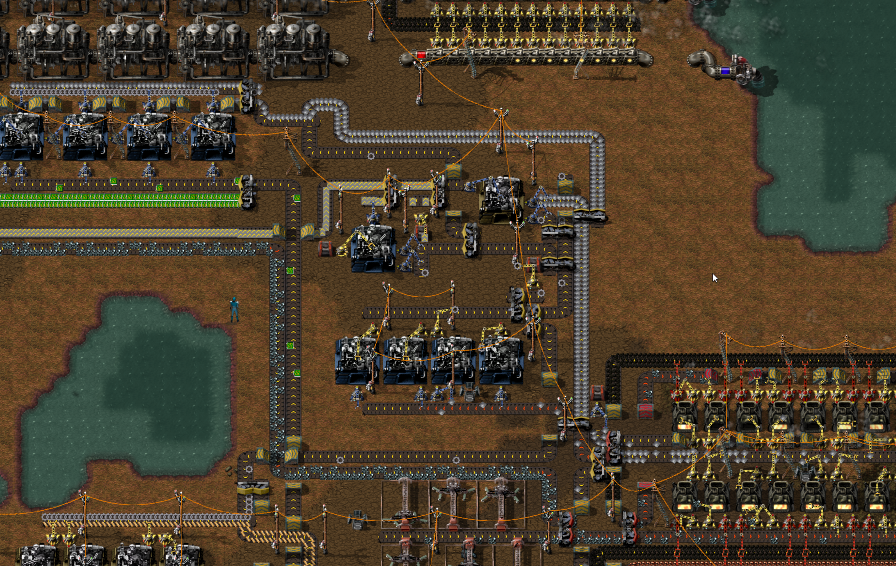 A random factory being built in 0.6
Click to see full resolution

I didn’t even bother trying to migrate after realizing that this would mean I’d have to show 0.18 with 0.1 map generation, and just tried to build a new factory in 0.6 and then again a new one in 0.12. This seemed like a reasonable approach as each of the versions works quite significantly differently, so the resulting factories should also be different, right? 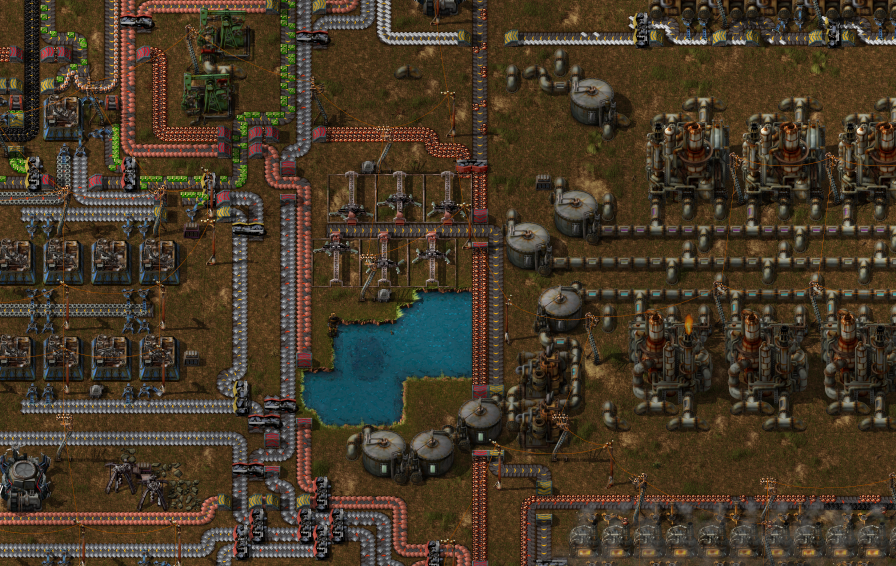 A random factory being built in 0.12
Click to see full resolution

Not so much. Since the trailer is short and quick, it’s absolutely critical to minimize confusion as much as possible.

This is why after a few days I restarted it all, and started by designing the final clip in 0.18, and going backwards, with the aim to have the factories look very similar. Of course newer save games can’t be loaded in older versions of the game, so I just had to take a screenshot of a factory with a grid, and try to replicate it in the older version by hand. Having played each of the versions earlier at least gave me a good overview of the differences between versions and made it easier to realize what should be highlighted in each.


A concept of a factory for the trailer in 0.18
Click to see full resolution

When I create factories for screenshots (like FFF), I almost always use the /editor as things can be done very quickly that way. It wasn’t necessarily a surprise that 0.12 did not have the same editor as 0.18 does, but I was completely shocked actually experiencing the differences.


A concept of a factory for the trailer in 0.12
Click to see full resolution

For example, console commands could not be run in the map editor, entities would get removed by X instead of normal clicking, blueprints would not place real entities, the game could not be unpaused in map editor (making placing items on belts almost impossible), and so on. And it wasn’t just the map editor, having gotten used to Cut/Copy/Paste, pipette and Shift+R and so on, the game suddenly felt extremely clunky to use and everything took much longer than it normally takes.

I placed in map editor what I could, and after that put a lot of items in chests to build more, and spent some time playing the factory, making science and generally making the factory run in order to have things move in the final video.


A concept of a factory for the trailer in 0.6
Click to see full resolution

The process was getting progressively more difficult with 0.6 and 0.1, some things making me actually laugh instead of cry, or both. I’m not going to paste our complete changelog from the last 8 years, but I’ll just point out a few things that really stood out.


A concept of a factory for the trailer in 0.1
Click to see full resolution

You can see the last few screenshots always share some features. This will be even better in their final version, making the video flow much better between these clips.

It felt quite interesting to just play the old versions after all this time. In a way it felt like playing a different game or some spinoff. Apart from the immediately obvious differences in graphics, the core idea of mining-smelting-assembling was still there, but with so many differences... Especially in the interaction, it’s usually small differences, but they really add up. This really made me appreciate what we have come to so much more, and in a way remind me that the details we’ve spent time on were really worth it.

Eventually I got through it all and I can now record clips for the trailer. You’ll be able to see them on 14th August.