The COVID pandemic around the globe is making it really hard to plan any event these days, and we were pretty optimistic just a few weeks back. However the situation here is now changing for the worse it seems.

The number of positively tested cases of COVID here in Czech has been increasing in relatively high numbers every day for the past two weeks, and the restrictions are again taking place. In Prague, face masks are required to be worn again where more than 100 people gather indoors, no events over 500 people are permitted as of last week, etc.

The current uncertainty together with the fact that at least half of the invited guests will not be able to attend the party (including some members of our own team), have led us into making a tough decision: we have decided to cancel the Factorio 1.0 release party we were intending to throw on 4th September 2020.

For those of you who already purchased a ticket(s) - the full ticket price will be refunded.

We hope there will be another opportunity to meet you all in the foreseeable future, but for now, please accept our apologies for any inconveniences caused. This wasn't an easy decision for us to make, but we believe it is the right one.

Over the last weeks and months, we have been preparing for the marketing of our 1.0 launch on the 14th of August (just 2 weeks to go now). Part of our plan is going to be sending out some free press keys to Youtubers and streamers and other content creators, in the hopes they will give the game a try, and help spread the word. To prepare, Jitka and I have been doing our research and compiling a list of suitable individuals to send a key to.

It is not a shocking fact to find out that Youtube is massive, and I think even if we spent a year everyday going through it, we still wouldn't find 10% of channels that we would like to send a key to. So we decided to start this simple form, that you can use to suggest your favourite Youtubers to us, and help us make sure they don't miss out on the review keys when we are sending them. If you are interested and would like to help us out, you can fill in the form here.

As we're done with redesigning graphics for 1.0, we could focus on other graphical improvements. Because we are so close to release, it's a good idea to focus on things that are unlikely to break the game and don't cost too much time, while having as large an impact as possible.

One of the biggest themes of the game is pollution. Considering that, it's one of the least visible elements in the game - you can only see it in the map view, and on dying trees. It would be lovely if we could make grass or decoratives die too, but that's something way too technically complicated for now.

But one thing that could and does show pollution is water! For a very long time we’ve had green water tiles in the game and we've used them in campaign missions. 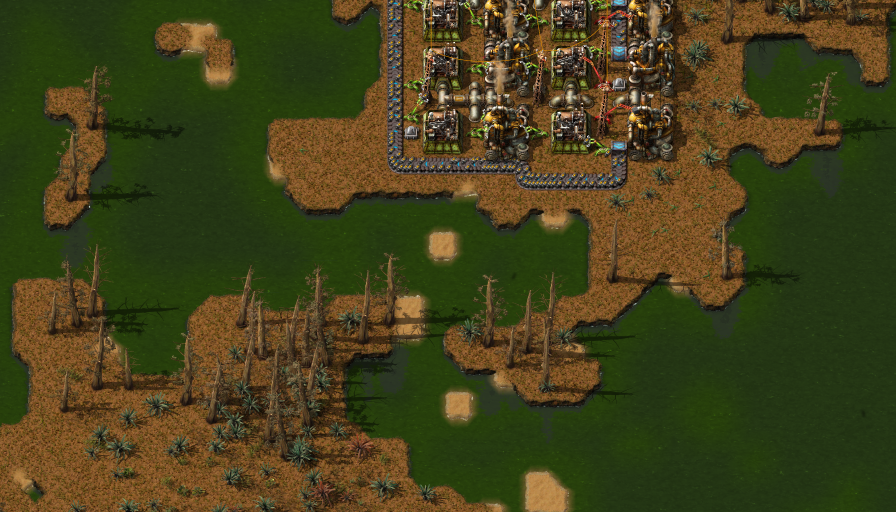 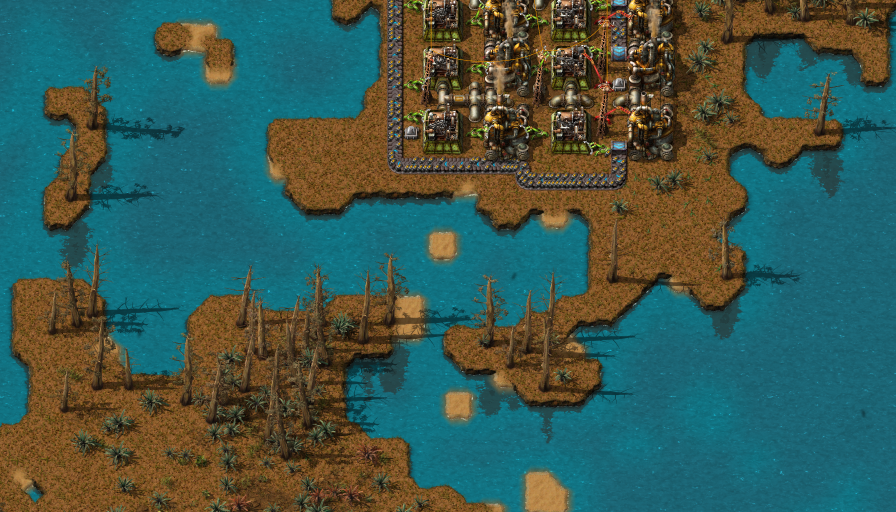 Two water tile types, one or the other.

As it's 'just' tiles, it wasn't really feasible to use both of them - because transitions between them would be too abrupt. Not to mention water tiles would have to generate that way, and dynamically change as the map gets more polluted, leading into more technical problems. 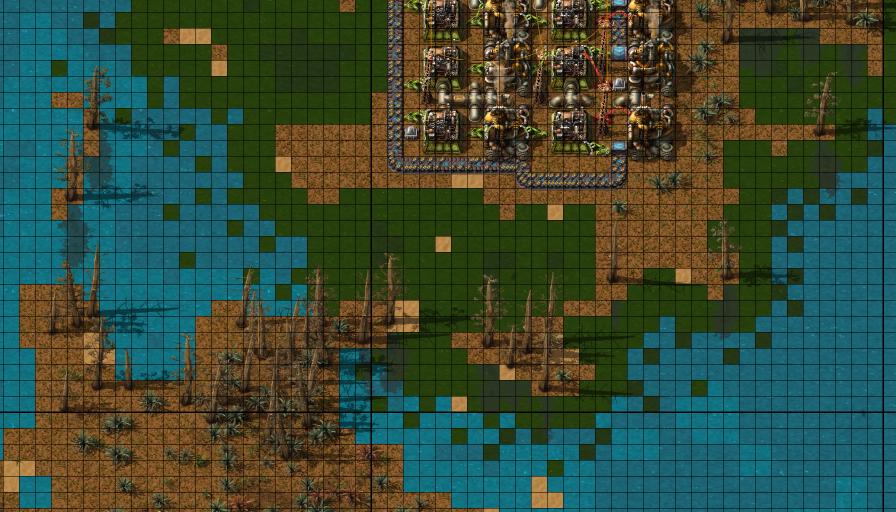 However, since water has been updated to use a shader rather recently (FFF-323), we could make it look polluted dynamically.

After some typical posila dark magic of interpolating and converting the pollution values on chunks, we could blend between a primary and secondary tint of water tiles. This way it is also directly tied to the red cloud you can see on the map so it's consistent. 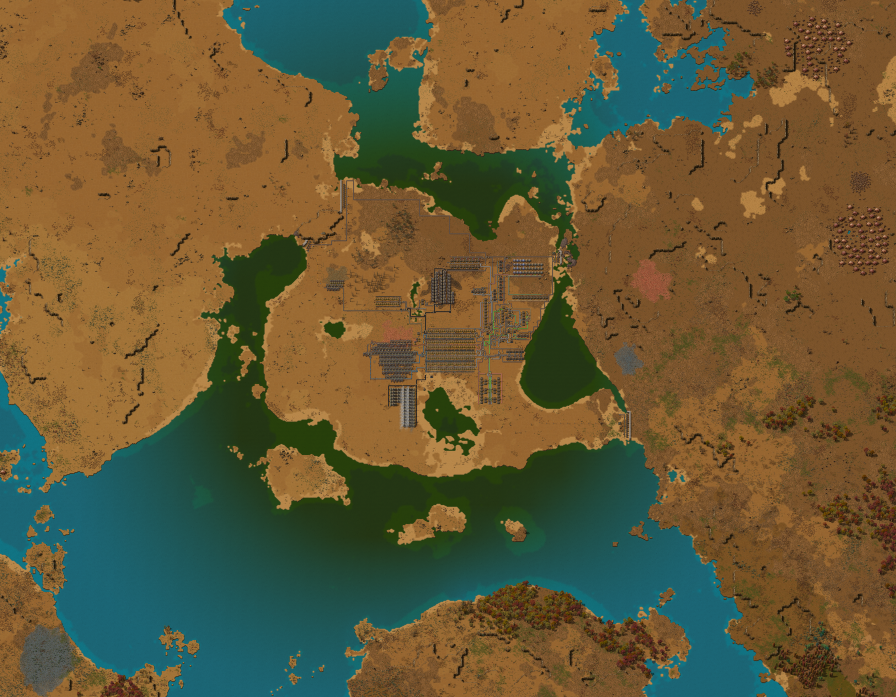 The green water tiles still exist if scenarios want to use them, they just always show as polluted.

The pollution effect won't show if the 'Show animated water' setting is off, or if pollution is disabled in the map settings. Mods can also adjust or disable the effect it by changing the secondary water tints in the tile prototypes.

When the whole family of biters got their redesign, one of the plans for later was to give them their own biome in the world.

We had some temporary decal and decoration sprites prepared for a long time now, but somebody needed to add them to map generator. In the end, we didn't want to spend an awful lot of time on tweaking generator properties to place them just right, and also we wanted them to be created under new bases as biters expand, therefore we decided to add special logic to generate them as spawners and turrets are created. If your mod already has its own solution for creep, you can disable base game one by clearing spawn_decoration prototype property on spawners and worms.

Our initial naive implementation was placing the decals just randomly, and Ernestas turned the number of the decals created up to 11 to make them cover the ground the way he liked. That in turn made me (posila) unhappy, because in the middle of biter bases there were too many decals overlapping each other, that even your GTX 1080 would take notice of the increased workload, and a laptop with an integrated GPU would fall to its knees. That made me realize that artists probably wished our tile renderer had a texture splatting feature. But I wasn't really ready to change the specification for tile renderer yet again and rework it to add more new features into it this close to the release. We also really didn't want to add an option to disable the rendering of decals as that together with already existing option to disable decoratives would make terrain look completely plain.

So instead we changed the decal placement logic use Poisson-disc sampling, which produces points that are randomly placed but somewhat evenly spaced out from each other, and this fixed the excessive overlapping.

Once we knew it could actually be generated (including bases created by biter expansions), Ernestas could finalize the graphics. Mucus, mold, eggs, worms, all kinds of bodily fluids and slimes. You can see how this immediately looks much more like a 'nest'. 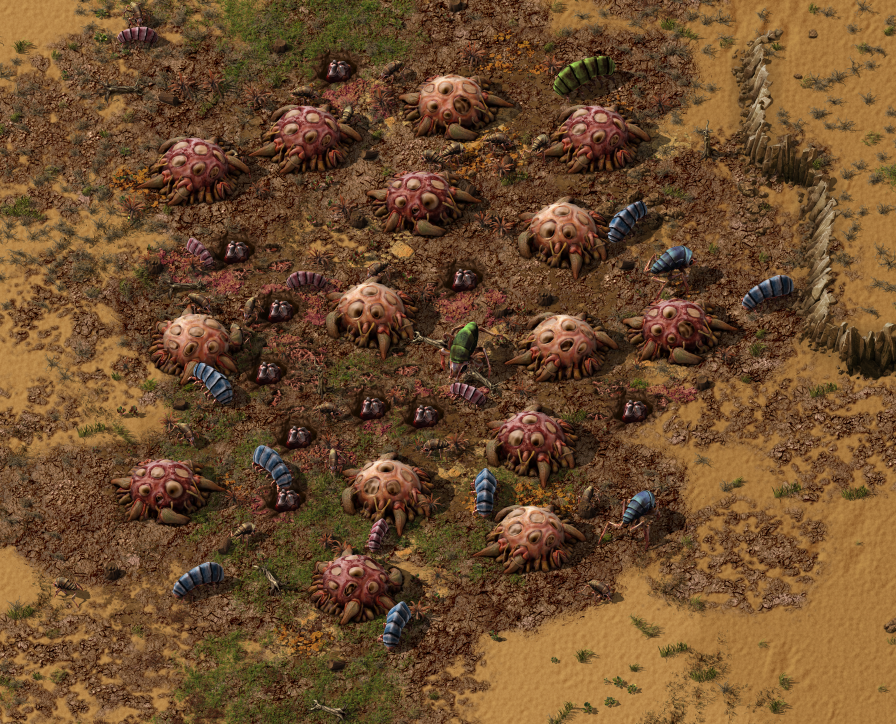 We decided not to bother with a migration as we need to focus also on other things (like fixing bugs), so existing biter bases on older maps loaded in 1.0 won't have these decoratives. We imagine a lot of people will want to start a fresh map anyway, and it's a nice identifier of a 1.0 map.

Both the polluted water and the biter decoratives will be released on 14th August in 1.0.